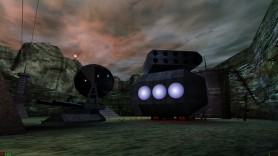 An architecturally basic but action-packed (not so) short single player campaign for Unreal.

-Short version: Your ship got attacked and you need to get off, but when
you land on a friendly planet you find more Skaarj and say “Damn.”

The Skaarj have damaged many parts of the ship and the main power source
is destroyed. The door leading to the hangar has been blocked, and the
Emergency Teleporters that lead to the hangar are offline due to the power
drop. Engineering is locked and the coolant system is damaged, so the engines
are overheating and will soon detonate the whole ship.

Your only hope is to activate the EPS (Emergency Power System) to unlock
Engineering and restore power to some parts of the ship. In the Engineering
section, you can try to divert the engine power to lower the core temperature
and to aid the EPS, which will also activate and unlock the
Emergency Teleporters. Miraculously, the escape shuttle in the hangar is
undamaged. Get to the shuttle and get off the ship as fast as possible. 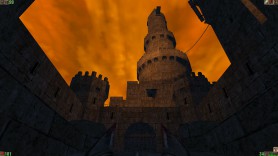