If we look at it through the lens of the 1998 Unreal mapping scene, Deep Space 666 is one of the better early maps. You drift in space for months alone in an escape pod when you encounter and dock a space station with very hostile aliens on board. To survive, you need to gain control of the bridge and teleport yourself out. The map, which is Chris Burgess’ (author of Gramercy and One Day) second release, is well-built for the standards of the time (we are talking 1998) and it has its moments, particularly when you turn on the main power generator. Far from perfect, but a fairly good map for a second SP release that should be known. 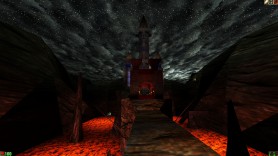