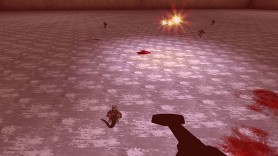 Yes, this is one of those beginner mapper’s first attempts. We could argue if maps like these should or should not ever be released but of course this is how new mappers learn: through constructive criticism from the community, so why not. We should also take into account that this particular map was released merely 3 months after the release of Unreal. In any case, don’t expect a big gameplay awe here, but you may be surprised by some of the ideas presented in this map. Even though they are often as annoying as they are interesting.