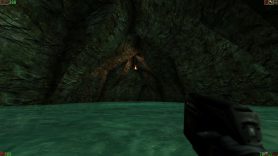 There is no mention of the release date in the Readme file of this 5 map long single player campaign made by Paul C Roberts, however from the file modification dates within the archive we assume it was on the 7th of February, 1999, which puts it in the early-ish era of Unreal SP mapping, the heyday, so to say. For that, build quality is not too bad actually, especially taking into consideration that it was the first release of the author. I personally was pretty surprised by the quality of geometry, texturing and lighting right at the very first location of the map because I looked at the Readme file first that, after suspiciously calling it a “collection” of SP maps rather than a coherent SP campaign, it goes on to describe the story as follows:

Err., Uh Huh err… you are assigned to go around
and shoot stuff..!,.. sorry ,im no good at stories..

Having played the 5 levels, it was clear that it was no exaggeration.

Nevertheless, we have to admit that it was a great achievement from the author at the time as a debut SP campaign and shame for the lack of a good story and coherence which, combined with its build quality, could easily have raised Hollow to the level of some of the early classics of Unreal single player mapping history.