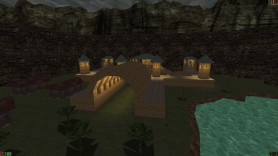 Jiganara Kingdom is Mattias “Uran-238” Ekh’s 3rd map release, based on information in the map’s text file. The map itself is named Jiganara3.unr and apparently he released Jiganara 1 and 2 at some point. We do not have those two maps here at Unreal Archives yet, but having played this one, we have a pretty good idea what quality those must represent. Jiganara Kingdom is clearly an almost complete beginner’s work. You start off in a hut in the middle of a Krall-infested village and fight your way through some empty terrain to a temple where the map abruptly ends having failed to load the next level. The last location – the temple – clearly has a concept to it but the execution is too poor to impress.

What makes the map more interesting is the fact that Mattias “Uran-238” Ekh is in fact one of the mappers of Team UnrealSP, Maekh, who participated in the making of Deja-Vu with the 14th map of the pack. If you don’t remember that map, it’s worth going back to Deja-Vu and see how nicely a mapper’s skills can improve over the course of a couple of years. New mappers, don’t dive up!