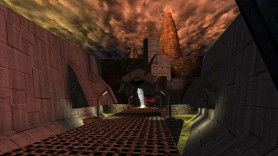 This map is a really old one, back from as early as 1998. Remember that Unreal itself was not released until 22nd of May, 1998, and Liberation of Na Pali: Episode One came out just 5 months later. Although the “episode one” in the name suggests there is a follow-up story, unfortunately a sequel was never released. It would have been interesting to see more, but the map stands its ground on its own as far as the story goes. As in so many cases, the community is divided on whether to call it one of the classics or even a decent map, and newer members of the community might say the eyes of those who played it at the time might be clouded by a sense of nostalgia, but the very least we can say about this map is that it is one of the better early Unreal SP maps. It has an unconventional start and does feature some creative elements that stand their ground even today.

As for the story, Earth is now in a full scale military invasion against the occupying races of Na Pali in an attempt to liberate the planet and it’s native people, the Nali. (Although the readme doesn’t mention it, the real motive is no doubt to control the tarydium-rich planet’s resources, we might add.) You and your comrade are sent behind enemy lines on a mission to rescue an important Nali leader with critical knowledge on enemy facilities held captive by the Skaarj. You land at a huge hydro-electric dam powering a Skaarj war factory which you have to infiltrate and find the Nali prisoner inside of it a.s.a.p. (for more details refer to the readme file).

Download, enjoy and decide for yourself whether LiberationEp1 still worth to play. And, of course, rate it!