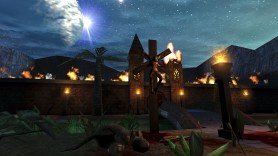 Nali Chronicles is one of the rare single player releases that dare to go far beyond the classic Unreal experience. It is undoubtedly one of the most unique SP campaigns to date with its brand new perspective (you’re playing as a Nali) and its system of spells, alchemy and even skill levels that increase according to your actions. Yet at the same time it is a campaign that couldn’t be more ‘Unreal’. NC takes place on Na Pali, several hundred years before the events of the original Unreal game, and puts you into the perspective of the early Nali fighting for their freedom against the Skaarj.

Nali Chronicles was released in two installments. Part one came out on 14 August, 2003 with 14 maps and the final version followed on 23rd March, 2005 adding 12 additional maps to the campaign. We provide both versions for historic reference, but the final version is the recommended one.

We also provide download for an unofficial patch for level 13 made by Fashahhh from the UnrealSP.org community, which fixes one major texturing issue.