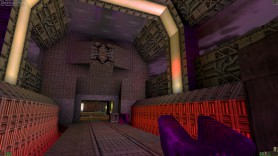 New Alcatraz is  a single player campaign for Unreal Tournament created by Tomas “Drevlin” Lidström featuring three playable maps with additional intro and an outro maps made by someone called El’Paco. The build quality is such that the time of its release was pretty much the last when it could impress anyone (if at all), since the Unreal SP community had seen much better campaigns before 2001. For enthusiasts of Unreal SP mapping history it is a known campaign though, and for those who haven’t come across it yet, it will provide a good half hour of mediocre gameplay experience.