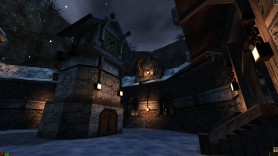 Unravel the secrets of the icy planet of Zephon. A build with truly awesome level of detail. For hardcore gameplay challenge, download the older, 1.20 version.

Current status update from marine HQ regarding the recent events on Zephon:

Zephon was a hostile planet at first, the cold atmosphere (up to -50∞ C) made life on this planet impossible.
It all started with the beginning of the terra-forming wars, when human colonies like Mars and Venus attacked the
terra-forming installations of the NEG on various planets all across the known universe. They attempted in stealing
their technologies and invading planets which have just fallen under the occupation of Terran forces. The Skaarjs took a
large profit of the situation and took control over a series of strategically important planets.

Zephon was one of these planets, and the battles that took place on its surface were immense. Source of infinite nitrogen
due to the high numbers of glaciers and underground exploitations, humans used terra-forming to use nitrogen as primary
energy. The Skaarj made several attempts to take control of the planet, but received heavy resistance from the Terran forces
based on the surface of the planet. We suppose a mother ship crashed high in the mountains during one of those battles, but we
found no evidence what so ever verifying that, so we are unable to prove it.

After the battles which left the Terran forces on the planet in victory, the marines established a series of security installations
so extraction and processing of nitrogen started again.

Fifty years have passed since than, the colonists have build countless factories, expanded underground mines and improved cities
on the planetís surface and the planet gradually won independency from the NEG. Marines left the planet after the Skaarj had been taken care of.

But problems arose now. A few months ago we received strange messages without any real significations and we havenít heard from the planet since.

We must discover what happened on the planet and resolve any problems that might have occurred.

I already talked to commander Riley about this problem and he left towards Zephon with UMS-Sakura and a group of marines to investigate recent events.