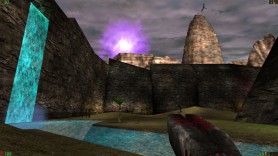 Sirius 38F3: The Unknown Planet is a single map release from 1999 by Arjan Vroegop. As the author states in the text file it is his first map, and as such, it is fairly decent. We have seen much poorer first releases. The map doesn’t really excel in anything though and there is the TorchFlame actor size bug as it was made with Unreal 2.24, the version before the bug appeared. It is the usual crash-landing story – you are stranded on an unknown planet and need to escape. May be a good map to kill 15-20 minutes when you have nothing better to do.