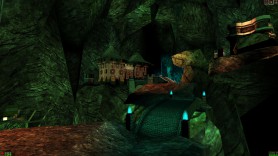 Skaarj Tower – Shadow and Fire is Andrew “Drew” Ross’ epic single player campaign released in 2004. Despite it only contains 2 maps, we can’t help but categorize as a ‘Large Campaign’, because the size of these two maps is unparalleled in all of Unreal SP mapping history. Not even Shamuquest can come close in size, complexity and play time – if we have to guess, each map will take at least 2 hours for the first-time player to complete.

The first map, Skaarj Tower, is misleading at the start. The unsuspecting player can even think it is a beginner’s work as it is quite low poly, lighting, although not terrible, is not especially beautiful, and the item placement is best described as crazy, with much of the game’s weapons with plenty of ammo, health and other pickups laying around right at the beginning in the first rooms. The player will soon realize that not all is what it seems though. As the player progresses in the map, he/she embraces an arcade-like, fast and action packed game style that is in fact quite fun. Who doesn’t enjoy destroying enemies with a lethal blow of five grenades with practically unlimited ammo laying around, or exterminating them one after another with a series of head shots? While travelling through the enormous distances of the map, these quick but spectacular executions became a necessity – there is simply no time to stop and finish off each enemy with precise, economical shots.

We have mentioned that the maps are enormous, but what about the architecture? The first impression is that it is a newbie mapper’s work, until you reach the first epic scene, an underground cave with enough space for multiple fortifications and castles – and more – in it. Generally the buildings are low poly and good looking at the same time, with a strong medieval atmosphere to them. Often they lay on top of enormous, towering cliffs, connected by arched stone bridges. The conceptual grandness of these dramatic scenes is almost unparalleled. We need to add though that of the two maps, the second one is clearly the older work with poorer texture usage, lighting and architecture alike. It was in fact released individually as a Coop map a year earlier, on 21st of June, 2003. We provide a download link for this legacy version as well. In the second map there is also a more annoying than fun maze-like dungeon where you can get lost for an hour or so easily if not cheating. On top of that, the very final castle on the top of the towering cliff that you work so hard to get into fails to live up to the expectations and is disappointingly basic architecturally.

Overall neither of the maps of this campaign are perfect (far from it), and it is a shame that there is a declining build quality towards the end instead of vice versa. But the grandness of its scenes, and the obvious amount thought that went into designing them will leave you looking around with awe, and the arcade-like action-packed game play, especially if played in coop, will provide long hours of fun. Skaarj Tower – Shadow and Fire is definitely a must have single player campaign.