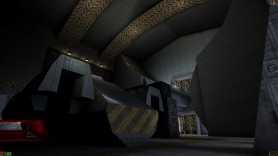 For those who missed it at the time of its release, Spantobi – Unexpected Threat might be a pleasant surprise. It is indeed a surprisingly good quality SP experience for a map that dates back to summer 1998. The setting of the map is an anti-asteroid human spaceship orbiting Earth, taken over by Skaarj forces. You are on a one-man mission to investigate the Skaarj’s intent and recover the communications link between the spaceship and Earth.

Right from the first room, the docking area, it becomes apparent that the architecture is exceptionally well built for a 1998 map. Throughout the map, Doze used low-poly but clean and good looking brushes, always in perfect alignment, to build the level’s geometry. Same is true to textures. The author uses pretty much everything from the DecayedS, PlayerShp, Starship and Skaarj packages, all of which seem a bit low-res and generally “old” today, but with a good taste and invariably good texture alignment.

The game play is surprisingly challenging for such an old map, with relatively scarce ammo (most of which is picked up from fallen enemies) and the Skaarj becoming increasingly resilient (and better at aiming) towards the end. An ample amount of translator messages make a good job of not letting you forget about the mission and why you are there, and they make sure you always have a next goal when something is accomplished. This prevents the map from becoming a meaningless room-to-room monster hunt. Changes of music are used with taste and fit the atmosphere of the actual stage of the story. The author used sounds, music, and lighting (or the lack of them) at the beginning of the map to build up pressure, something I particularly liked.

The size of the map is generous, providing a minimum of 30 minutes of game play, at least for the first time. A strongly recommended download.