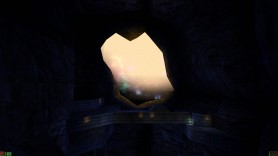 Star 861 is a short single player map from Grayson Edge, author of one of the renowned early Unreal SP campaigns, Hexephet. Interestingly, the two campaigns were released on exactly the same day, 23rd March, 1999. Perhaps the author decided to finish polishing his unreleased projects and get them out there all at once. Of the two, Star 861 is the earlier work, and the author’s first map. Because of this, it lacks the detail and apparent care with which Hexepeth was made, and unfortunately the gameplay doesn’t offer too much to remember except for an annoying transport vessel that keep crushing the player for no apparent reason until he/she finally learns how to use it the right way. The Mothership-like interiors are relatively convincing for the standards of the time, but there really isn’t anything that stands out from the crowd except perhaps a small level of non-linearity in one of the later sections of the map. Still, we have to say, for a debut map, it is one of the best we have seen. Certainly worth a play for enthusiasts of Unreal SP history.