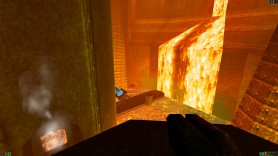 Tarmation is a 2-level, unfinished campaign by “TAZ” a.k.a. Paul Mader, released separately on the 10th June and 24th October, 1999.

While the build is far less detailed than that we have seen in maps in the following years, it was pretty much in line with the average standard of custom maps made around that time.  The conceptual design and grandness however makes up for much of it. Even though Tarmation is very, very far from a perfect campaign (or according to many, even a good campaign), it is apparent that TAZ had brilliant talent and imagination for creating his dark scenes, with apparent influence from the Quake series. (We would not be surprised if he also mapped for Quake 1-2, although there is no direct evidence of that that we could find.)

Overall Tarmation is a classic early Unreal custom map pack that many will find a lot of fun to play and we encourage everyone to give it a try.