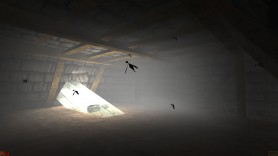 The Calling was created as an entry level for Myscha’s Level Design Charette mapping contest and as such is one of the very early SP maps for Unreal, back from summer 1998. Unfortunately it did not age too well – today’s player will likely to encounter bugs that we assume might have surfaced with Unreal version upgrades but nevertheless have an adverse effect on gameplay.

According to the story you doze off in your office during work and wake up to see a four-armed ghost calling you. You make the first steps out of the room just to see yourself rushing through a seemingly endless corridor towards a bright light. Your mission will be to rescue that Nali whose ghost was calling you from the arms of its Skaarj and Krall captors.

It is right at this opening sequence where you encounter a first two major bugs one of which will make it impossible to proceed without a cheat or tampering with the map yourself and fixing it. The other bug is simply that the Nali animation sequence is messed up so that instead of calling you it just rambles around the office. The map afterwards is representative of the standards of its time, featuring some interesting design elements but nothing more. As the author himself noted in the text file, he had to cut loads of corners in order to make it on time for the contest deadline.

It may be interesting to have a look at as a piece of UnrealSP history.