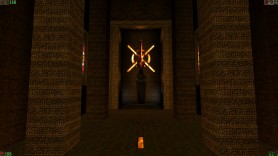 The Court of Izn-Nali was created for Myscha’s Level Design Charette in summer, 1998 by a rather unknown mapper, Claycle. It has the look and feel of a beginner’s map, but as a contest entry map, it is at least minimally functional, and has a simple story that unfolds through a series of translator messages. The mission is to rescue a Nali priest held captive in the The Court of Izn-Nali. As most of these early maps, it is not much of a challenge, a simple monster hunt with plenty of ammo and health laying around. What can be difficult however is finding a few hidden switches which are placed/hidden into their surroundings with no or almost no indication of being separate entities. It can be really annoying. Grab this map if you have the nerve!