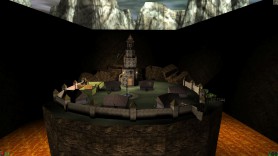 The Demon’s Keep by Jeroen “CoBoDeRa” Breukels is a 2-map short campaign featuring some interesting locations, particularly in its second map. Although the basic story is the usual crash-landing on an unknown planet, in this campaign there is actually some story progression through translator messages which is more than we can tell about many of the beginner’s maps of the time. There are also some cutscenes and a level of interactivity with the environment (e.g. using a hand glider) that was rarely seen in 1998’s maps. The author apparently mastered UnrealEd quite well in the five months that passed since the release of the game.

Overall The Demon’s Keep is an interesting piece of mapping history that simultaneously has a newbie mapper’s feel to it as well as a certain level of professionalism and conceptual grandness for the standards of its time.