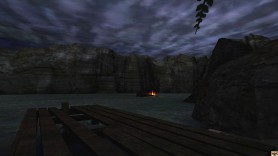 The Fury is an unfinished, two-map SP campaign for Unreal Tournament by Olav Groenaas Gjerde. The first two maps (out of who knows how many planned) were released separately on 26th February, 2002 and 8th March, 2002 respectively. In the lack of a detailed ReadMe text file these dates are assumed from the last modification data of the unr files.

The levels represent a good architectural quality for their time. The author makes good use of scripted events throughout the pack and quite successfully builds up the anticipation of something bad looming around the next corner at the beginning of the first map when you, as the unsuspecting survivor of a shipwreck on an island you proceed to enter the deserted-looking facility that lies ahead. How much of an awe the map pack provides after this built up tension, that can be debated. On the negative side, among others there is the complete lack of translator messages (for which the handful of on-screen messages provide little compensation) and the complete lack of story construction that comes with that fact. Taking into account that the author certainly did know how to build up some tension with breaking glasses, flickering lights, various sounds and other little touches, a few well-written translator messages (particularly in the vicinity of the dead bodies) could have raised the atmosphere to a level that would be much more memorable.  Despite this we can safely recommend this little unfinished map pack to anyone as it is definitely not a bad one. The non-linear nature of the first map makes it fun to play and is also helpful for avoiding unnecessary fights, saving the scarce ammunition that is provided throughout the pack. You should definitely give it a try if you haven’t played it yet!

We use cookies to ensure that we give you the best experience on our website. If you continue to use this site we will assume that you are happy with it.Ok