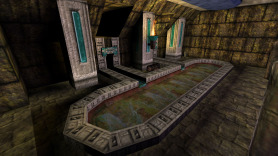 The Heart of Chizra is a curious thing. This single-map episode features both an intro and an outro map but the single playable map in-between is so short that, with a bit of an exaggeration we could say that  it hardly takes longer to run through it than to watch the intro and outro. It merely features a few rooms with one Skaarj, two Kralls and a few Tentacles. Your goal is to find the Heart of Chizra, although as to why (and what it is) remains a mystery. According to the ReadMe file, the author apparently had a boring day so he decided to put together this map as his first SP release. Apparently he already had a background in mapping at the time (maybe DM maps?), the architecture and some other elements clearly indicate that it is by no means a complete beginner’s map. Not a good one either. In the outro the author outright states that it is a “shit map”. May still worth a download if you have 10 minutes to kill.