The Incident At Nali Canyons 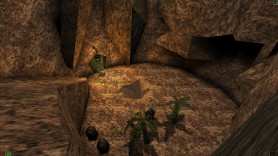 A simple map from the very early days of Unreal – the file’s last modified date is 31th May, 1998, one month after Unreal’s release. Some sources say this is the very first user-made single player map for Unreal. Whether that is true or not, we cannot confirm (although we have our doubts), but it is indeed the earliest map we could get our hands on so far. And, as such, it is actually not a terrible one. There are even some areas that are NOT built entirely out of primitive shapes, and we have seen much worse lighting in other maps. There is also an attempt to create a story through translator messages which was not all that common among the first SP maps. The biggest problem is that it doesn’t have an exit point – there is merely a translator message letting you know that it is over.

As it won’t take more than 10 minutes, you might not regret having a look at this early piece of Unreal history.