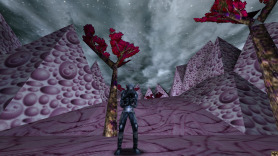 Living Planet is by no means a quality map but it has a few unique aspects. The story takes place in its own universe which has nothing to do with Unreal. The living planet is an isolated peaceful world the inhabitants of which, including plants and animals, act as a single organism. Due to its isolation however it is highly vulnerable to outside factors. When a scientist picks this world as a target for his experimental teleportation system, he accidentally brings in with him a virus that makes the ecosystem to produce monsters. The organic design of certain parts of the level are interesting and similar visuals were rarely seen during the 15+ year history of Unreal single player mapping. If you were a Half-Life player at the time than the visuals mush have been slightly more familiar after the world of Xen.

Although there were already some professionally executed single player campaigns at its time, The Living Planet offers slightly more in terms of technical execution than many beginners’ maps of 1998-99.