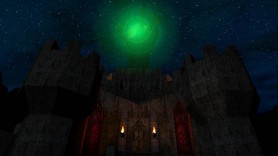 During an investigation of a mysterious ruin on a desert planet, it becomes apparent that there is a vast source of power contained within it. Some time into your search of the decayed structure, you absently touch a medallion and a bright ball of bright light surrounds you. Seconds later you find yourself in a large house confronted by strange four-armed creatures and strangely you collapse from fatigue. In the following hours the creatures tell you of your plight, and that this medallion that travels between worlds may only be used in this world if the Guardian is defeated.You learn that the Guardian may be reached through the heights of the Tower of Shrakith’a and you decide that this is where you must go. And so it begins….

The Tower of Shrakith’a is without question one of the legendary old classics, and if you haven’t played it yet, you should stop reading and proceed immediately to the download link. That said, players may be divided on how overrated it was at its own time (or even today), but still many players seem to love it, and probably with a reason. Few Unreal single player projects manage to suck the player in so deeply into their own world with their story and atmosphere.

The Tower of Shrakith’a takes place in it’s own universe, there is no evidence it is connected to the world of Unreal in any way. You play an archeologist who, during the investigation of some ancient ruins on a desert planet, touches a mysterious medallion and is teleported to a strange world inhabited by strange four-armed creatures (Nali), living in the shadow of their oppressors (the Skaarj). The Nali tell you that the medallion is used to travel between worlds, and the only way to use it again is to defeat the Guardian living at the heights of the Tower of Shrakith’a.

The three-map campaign offers a generously long first-time play-through with very cool, sinister atmosphere, some nice puzzles and a final boss fight that was one of a kind at the time of its release.

This download is the final version released a few months after the original, on 25 December, 1999.

One Response to "The Tower of Shrakith’a"