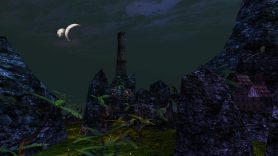 Enslaved is a very ambitious single-map SP campaign for Unreal Tournament, the scale of which probably hasn’t been seen since Skaarj Tower. Its conceptual grandness is also the best thing about the map. Unfortunately there are some gameplay issues, small and big, and we even experienced serious bugs, some of which can hinder the player’s progress through the level. Invisible obstacles blocking the way, a teleport that inevitably switches off before the player has the chance to use it, a huge elevator without any sound and a couple of other elevators whose trigger has some kind of strange issue, rendering it unusable at times; too little ammunition early in the map and way too much towards the end, ridiculously easy boss fights on an otherwise challenging map are some of the issues we noticed while playing. That is not to say we can’t recommend with confidence to download and give it a try. Imperfect as it is, strangely the map is still likable, perhaps for the obvious effort that was put into creating its location that looks great. Newer and newer areas keep opening up that makes the player wonder what else is in store, and when does one finally arrive to the “underground cavern” hinted very early in the map. Start it with an open mind and be ready to forgive its shortcomings and you will have fun with it.

The map was originally made for the 8th Unrealsp.org Speedmapping Contest in 2009 with version number 0.1, and re-released as 1.0 on 15th August, 2016, with bug fixes and general improvements. Much later, on 9th March 2022, community member Aspide released a much improved version (2.0) with the permission of the author. It fixes many if not all of the major issues. Enjoy!