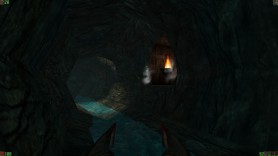 The Rescue of PaNunu was Gregor “GreyGore” Wood’s entry into Myscha the Sled Dog’s Level Design Charette in July ’98, and as such, is from the very early days of Unreal SP mapping. It was actually the winner of that contest, which might seem strange, having played some other maps that took part. The Calling, for example, seems to be a much more interesting memorable experience.

According to the author’s notes this is his very first map, so don’t expect much of a miracle here. Flat, colorless lighting and simple layout involving box rooms is what awaits you, although the author made apparent attempt to make it more interesting with many custom decorations using bsp brushes. He also made fairly good use of scripted sequences which probably won it the first place in Myscha’s Level Design Charette.

PaNunu, leader of a band of Nali resistance has been
captured by the Skaarj while attempting to locate
an ancient city… you must rescue him

The map may be worth having a look at. Even if you don’t like it, it won’t take much of your time as it is very short.