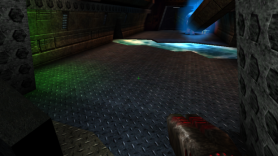 Unreal PSX – Rise of JRath is an ambitious, ongoing project promising around 30(!) unique missions when completed, each consisting of several smaller maps. You play a bounty hunter sent to the planet Na Pali by Inuit Corporation to locate the wreck of Vortex Rikers and recover several AI implants, key parts of a secret military experiment.

The mod is based on Unreal’s official Unreal port for PSX originally developed by Pterodactyl Software, that featured all new content compared to the PC version. Unfortunately the development was cancelled before completion. Thanks to his detective work, however, Leo(T.C.K) managed to recover almost all of the original, unfinished maps from the developers and used them as a solid base of this single player project, filling the small gaps in the original levels here and there.

Rise of JRath features several innovations including a new weapon allowing the player to take control over certain enemies, as well as a text-based dialogue system and many others. The mod supports both Unreal (versions 224-227) and UT.

So far only the first instalment of the series has been released that is referred to as ‘Episode 1 Part 1’. It was introduced as a ‘demo’, however contrary to the title it offers a generously long gameplay. It seems to be a very promising Unreal SP project with many innovations that is truly worth a try. Play it, and you will look forward to the next instalment. Guaranteed.

We will update this page as soon as the next instalment comes out or there is any other significant update on this project. For the time being, enjoy the demo (download below)!