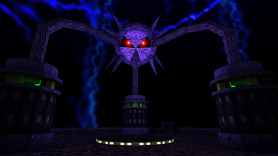 Invasion, sometimes referred to as Xerania’s Fall – Part 2, or deCyberInvasion, is supposed to be a follow-up to the single map of Xerania’s Fall, although there does not seem to be much of a connection between the two campaigns as Xerania had already fallen at the end of the aforementioned single map. The unfolding story through the translator messages in Invasion does not help to make things much clearer, however it does just what it takes to keep the player’s interest. This, together with some unique ideas and puzzles help keep the fun factor at a level that keeps you going.

Although arguably one of the highly overrated ones in their time, Invasion is definitely one of the well-known early classics that are worth remembering – and perhaps replaying every couple of years or so.

The campaign consists of 6 maps, only 5 of which are actual playable levels (ending sequence map excluded).

We currently have the final, 3.0 version only. Works on Unreal 220 or higher. We will make other historical versions available for download as soon as we get our hands on them.